My dad had been complaining of a severe headache for a week. And it was getting worse by the day. He had been to all hospitals in Meru (hospitals in upcountry Kenya can be shit and everyone had been giving him shit painkillers)… including miti shamba. Nothing was working, no one knew what was ailing him. The best bet was, he had been bewitched, or cursed, or both. You don’t suffer from unknown diseases.

So, he traveled to the city, to Kenyatta National Hospital, to see a specialist. As you know, Kenyatta National Hospital may be the largest hospital in the region, but it can also be the shittiest in terms of service and valuing human life. I think they have seen too many dead people they don’t care. But at least, this time he was diagnosed – with right transverse sinus thrombosis. That’s a bad blood clot in the brain.

That known, and as serious as it is, the doctor said “go home, and come back very early tomorrow so that we can admit you.” Ridiculous, right? Who postpones hospital admission? Welcome to Kenya.

We go home – to my place. In the middle of the night, my dad is screaming. My father, the epitome of tough, is praying a heart-wrenching prayer. He is loudly asking God to kill him to ease the pain he is going through forever, but to take care of his children when he’s gone. His only wish is not to get healed, but for his children to live well and in peace. It’s too bad… my mum and I are helplessly watching. No use looking for an ambulance because this is Kenya.

He is giving up. But I choose not to. We carry him to the landlady’s car – I am still saving for my big car. And drive on an almost empty tank to the nearest hospital – MP Shah. It is a very expensive hospital but life and money can’t be a match.

They treat it like the emergency it is. They say if we had delayed a few further minutes… You see, his pulse rate is 40 and dropping. His heart is stopping. He is dying, and telling me what to do when he dies. My mother is sobbing. I am stoically looking on and telling him to stop joking… I don’t want to believe it, so I keep pushing the nurses to do something, anything. And they are trying hard, the doctors are trying hard… but it doesn’t seem like they are doing anything.

Only that the results show otherwise, an hour later, he is still alive and not screaming. But the beeps from the machines attached to him are maddening. I leave the room and pace along the corridors… like they do in the movies.

No beds, let’s transfer him to Aga Khan or Avenue Hospital

He has to be admitted, but there are no beds available today. So, he has to be transferred to a hospital with a bed, and ICU space in case there needs to be an emergency brain operation. Damn! Or wait, there is a bed in the private ward… the deposit before they can admit him to that is a lot of money – usitake jua.

What’s happening? Does he have to die and we are in a hospital? I raise half of that and sign documents to affirm that I will raise the rest during the day – it’s 4:00 am. Just freaking admit him.

They do, and spend the day checking his failing heart, his brain… and pumping drugs into him. We spend the entire Tuesday in the hospital room, which looks like a hotel room complete with food menus, a TV and a badass washroom. 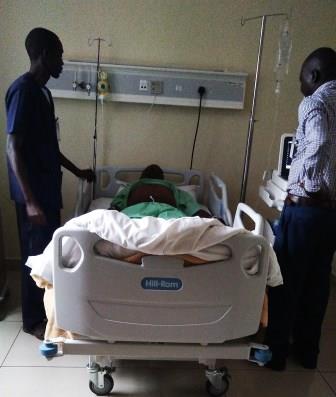 Evening – As it looks, he is not dying, you can tell he is fighting hard. He has stopped giving up, he is responding to the medicine. And we are there willing him to keep fighting.

And he is a fighter… because yesterday, a week later… he was discharged from hospital – completely healed.

We will fight another day. But not this way.

And God bless everyone that stood with us during that treacherous week. Thanks for your prayers, visiting and support.

27 Comments → The Night I Almost Became an Orphan