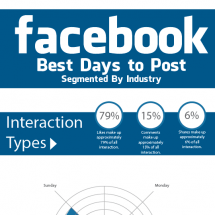 Is your company/brand on Facebook?No?Ok,you don’t exist.If you do,you may be wondering the best times to post important news,updates,etc.

Whatever you aim to achieve with a Social Media drive, you will be seeking for the maximum range when you go posting into the social media such as facebook. At least you want to make sure that people take notice of your posts and start to comment, like and share. Scroll down to the infographic below this post for the best days to post on facebook and get the impact you desire.

If you’re looking to take a day off from posting on Facebook, choose Wednesday, but don’t rest on Sunday or you’ll miss the best opportunity of the week.Weekends, when brands post too little, the audience appears primed for interaction, though it varies by industry.Not very good news for corporate Social Media teams.

Studies have found that off-hours are the best time to post. Brand posts between 8 pm and 7 am got 14% higher interaction than those published between 8 am and 7 pm.In a nutshell:
–iStrategy

Meanwhile, when it comes to posts, less is more. Brands that post one or two times a day see 19% higher interaction rates than those that publish three or more posts. The key is not to bombard fans with too many posts.They will get bored and Facebook mostly de-optimizes your feed.

Mashable
A recent infographic shows the best weekdays to post your content and is divided into industries. So go and find your optimum time for pushing out that great content of yours…

You Quit Accounting to Spend your days on Facebook?   Ladies and Gentlemen, I was an accountant! That’s right, I ... A-Z: 26 Tips For Building Powerful Personal Brand Online Everyone has a personal brand. Do you know what yours conveys to potential ... 10 Corporate Social Media Mistakes You are likely well aware of how powerful social media channels have become ...