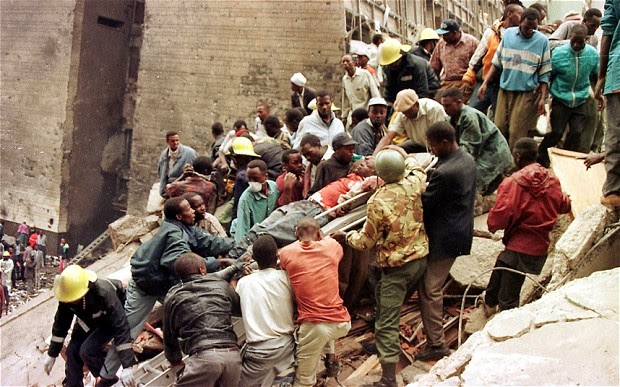 Kenya has been known as the island of peace and economic stability in a region under siege….we have been brokering peace around us since independence.
Now,the tide has changed.  We are on the receiving end of the very things we have been consultants against. Insecurity topping the class.
Previously. , we only knew of bombings from international media: the Palestinas, the Iraqis, the Somalis, etc. Not any more.  We now know the smell of explosives, gun powder, and definitely the smell of blood. Innocent blood flowing in torrents….every other day.
Kenya is crying. Deaths are too many. Tourists are fleeing. Investors are cashing their investments and leaving in a huff.
And most sadly, politicians are taking advantage of the debacle.
Granted, the government of the day is a joke, the intelligence situation is foolhardy, the Minister of Security is a caterer, cameras are being installed everywhere and our troops are still in Somalia.
BUT. But politicians are to blame. Why?
Where is our security policy?  The parliament is busy plotting how it will force us to call its occupants Honorable!
Why are the same things happening every time?  We almost expect them to happen. Our Intelligence Service is busy looking for people’s academic papers.
Why are we out of ideas?Because we aren’t united to one cause at all.  The Opposition is busy holding rallies and fathering crowds. Because the government of the day stole an election.
Then, why are we being attacked every day?  Because of illegal immigrants?  Because Muslim youth are being radicalized? Because IEBC failed in the last election? Because the father was away? Because we don’t have enough policemen? Because of corruption? Because the government has kept the soldiers in Somalia? Because County Commissioners were empowered? Because Anglo Leasing was paid out?
I am not an expert in matters governance, security or politics….but I think those aren’t the reasons.
I think it’s because one part our divide thinks the acting side is doing a bad job, and the other part is busy depending itself.
I think it’s because we are too busy talking about dialogues that we can’t focus on the real issues.
I think it’s because we are too divided.
I think it’s all down to politicizing a national scourge.
I think it’s because someone can’t hold someone to account to maintain political ego.
I blame politics and the holding politicians.
God help Kenya.
Pic: How it started. 1998 bomb blast. Telegraph

Gitura Chronicles Gitura 3 – Circumcision and Kabaine Living in towns is depressing. You wake up at the same time in the morning, ... Random Memories: Job Tarmacking was NOT a Joke 2011. I have just finished CPA, after years of struggle. If you know about ... Amerucan in America On a certain night last month, I was playing hide and seek with Calla at ...

2 Comments → Blame these politicians for the terror