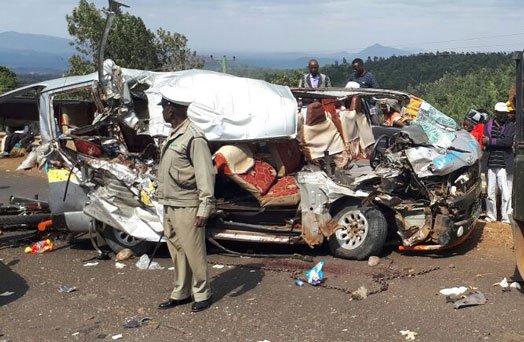 Last weekend was a dark weekend for our village and the surrounding villages. The dark cloud still hangs over us like a giant rock about to crash us. What you saw on TV and read in newspapers and social media actually happened to us. The horrible accident in along Meru-Nkubu Road that killed 8 people affected is directly. To us, it was not just a statistic. We lost family members, neighbours, close friends. Children are mourning the loss of both parents, parents distraught at the loss of their children… and we’ve been crying, wailing in pain, asking God Almighty all the questions and receiving no answers. See, it’s barely 2 years ago since another accident claimed the life of Mfa and 3 others that we are still not through.

And so, again, we were in the news for all the wrong and unfortunate reasons. Everywhere we turn, is news of a “grisly accident in Meru that killed 8 people” some say 9 and others 10. See, to the media and all these social media journos, it’s just another horrible statistic. Some reasons have been given, and the more you read them, the more you feel like gagging. These Merus deserved to die because they didn’t vote for someone, because they promised a certain politician votes but betrayed him and his tribe at the last minute. There’s also the celebration of the election winner’s sacrifice to the gods, they voted for him and he’s paying their souls to the devil. Also, the police is killing their tribesmen and this was the gods’ way of avenging them.

All this because of elections! We have been turned into heartless objects (no animal can be this heartless) by politics. Never mind everyone involved got his share of votes in Meru and you don’t know who these people voted for! And even if you knew, is a freaking election worth all this insensitivity? All this madness and lack of soul?

Don’t believe that? Just look at the comments on KTN, Citizen TV, NTV and K24 posts on Facebook on the accident. Here are a few (click to expand the comments):

There are other Kenyans celebrating police killings. Okay, the Police is trying to prevent anarcy from happening, but killing citizens is not the correct option, and no one should be dancing about it and saying these people deserved it. No one deserves death! Unless you are a killer yourself, 0f course.

A friend of mine posted on Facebook about the IEBC Chair, Wafula Chebukati’s report that his life is in danger. You should see the bile in the comments. Almost everyone in there wants that report to be true, almost everyone  wants him to die. I mean, really? Is elections worth a life?

These elections have taught me something. Loss is difficult, in all ways. Even if it’s Chelsea losing to Burnley because the referee gave two red cards. If your hope of positive change was pegged on someone and he lost, you will be understandably disappointed. This gets worse if you believe the loss wasn’t fair. That’s all human nature.

So, if you see such comments, try to understand. In a way, these people are mourning a loss also. Extend a hug, comment back and tell them you love them, show them you understand. If we insult these people like they are insulting our dead, it will be a spiral of negativity, which is not fair for anyone. We all need to heal.

But, as disappointed as you are, don’t make politics a matter of life and death. Especially death. Never wish death upon anyone, never be insensitive to anyone who’s mourning. It can happen to anyone, any time.

21 Comments → Celebrating the Death of “those people”